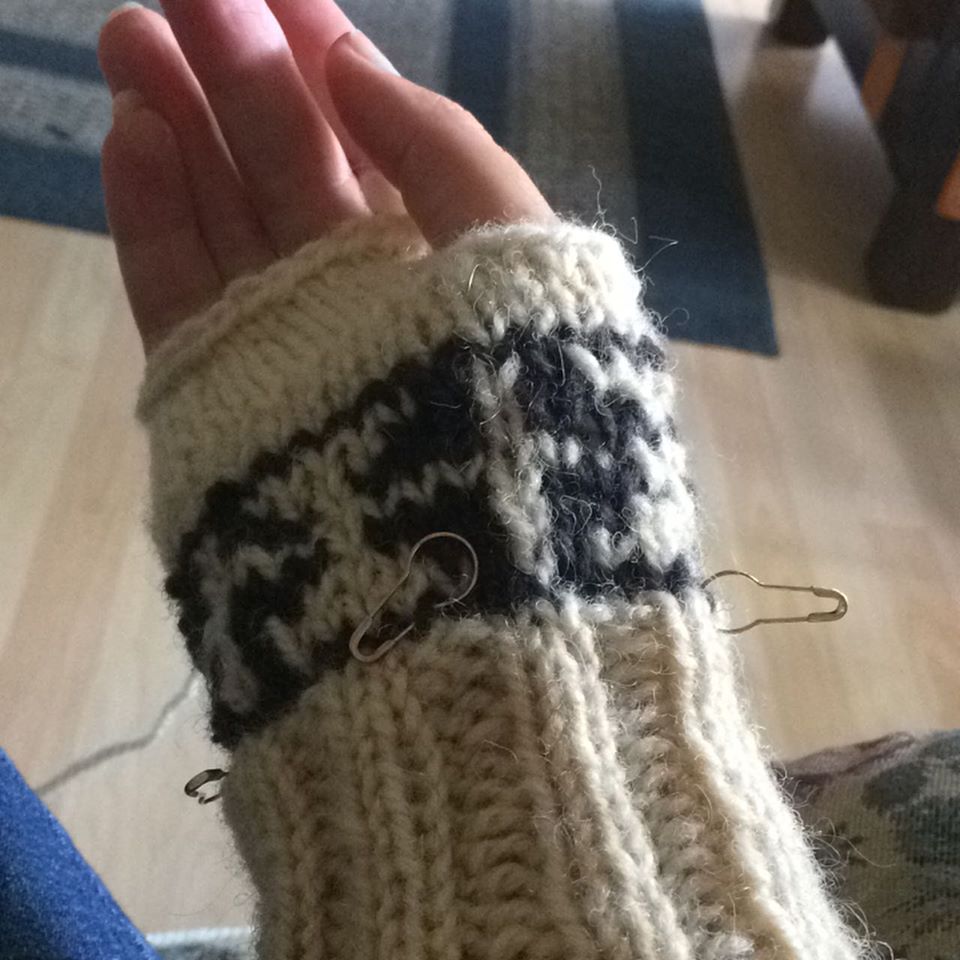 I’ve been doing some research on colourwork patterns and knitting histories and traditions as part of the development of a new pattern, the Huron Wristers.

The wristers pattern is based on a pair of lovely knitted gloves in the collection of the Huron County Museum & Historic Gaol located in Goderich, Ontario.

The museum’s gloves are approximately 100 years old, are knit with wool and are large enough to fit a man’s hands.

The pattern is somewhat similar to Sanquhar and Fair Isle colourwork traditions.

I went through many a pattern book and magazine, looking for where the pattern may have originated.

I’ve come to think that the knitter (said to have been a man in the museum’s notes), may have incorporated features that he liked into these gloves, perhaps not following one certain pattern but rather combining different elements into one.

I took my questions to the Knitting History Forum group and I got some interesting leads. If you are researching old patterns, I suggest you become a member… it’s free to join and it’s a great way to connect with others interesting in discussing knitting history.

Here’s what I learned:

The gloves feature a knitted fringe on a short ribbed cuff. I asked about this tradition and where it comes from. One of the members informed me that fringing has been used on both Latvian mittens and Estonian gloves, historical and modern versions.

The colourwork is close to Fair Isle, with only two colours being used in each row.

One member, named Sue, I’ll quote in full because she provided such a wealth of information:

“I have knitted a few Sanquhar patterns based on patterns produced by the Scottish Women’s Rural Institute which are assumed to be reasonably faithful to the tradition. These patterns were written in the mid 20th century, although the tradition is older.

My thoughts are that the design here is nearer Shetland ‘little flowers’ (peerie flooers) and not really in the Sanquhar tradition for the following reasons.

There are quite a few designs associated with Sanquhar. Possibly the most well known ones are based on 11 by 11 stitch squares. The squares have strong outlines with alternating patterns within the squares. Your example therefore does not fulfill these criteria in my opinion.

Some Sanquhar gloves also have an interesting finger construction with little triangular gussets in the finger spaces and triangular finger tips. Also, all the Sanquhar I have made have a shaped thumb placed on the palm side rather than on the side of the hand as here.

Finally, the stitch count, wool and colour are not really in the Sanquhar tradition. Gloves tend to be monochromatic. Wool used is finer, stitch count for the cuff around 80 stitches and modern needle size of around 2mm used.

Another group member, Angharad, replied to my question. Her response is below:

“The only pattern I could find similar to that used in these gloves was a 4 stitch x 4 row triangle in a Shetland pattern book … but there’s a limit to what can be knitted on a given number of sts in whatever colours are to hand. That’s how I think these patterns came about rather than from one tradition or another. Fringes are now associated with Latvia but there are 1846 (?) gloves from the north of England with a fringe and also at least two known pairs of liturgical gloves with a fringe.”

Check out these links

The Huron Wristers draft pattern is now at the test stitching phase. If you’d like to give it a go, I’d welcome the input. Just send me an email to sbolen@stitchrevivalstudio.ca and I’ll send the pattern your way.

I do have plans to do a full reproduction of the knitted gloves for the near future. Please stay tuned for updates on that venture.

Shop at Stitches With a Twist, Blyth